I’m sure most of you, oh classy and attractive readers, have had to move at least once in your classy and attractive lives. I know I have! In fact, I’m pretty sure I’ve moved 17 times in the last 8 years. But each of those moves was a cake walk compared to the most move-y of all moves, the one move to move them all, the move when I was dispelled from the warm, fuzzy, warmth-fuzz of higher education into the cold, spiky, ice-spikes of real life.

I’ve never really thought about what a cake walk is until now. Maybe it meant something back in ye olden times when you were just a blacksmith’s daughter and the most exciting moment in your life was when the traveling cake salesman came into town. But right now all I’m picturing is trying to hop from one cake to the next in a “the floor is lava” kind of scenario. Seems like an awfully wasteful use of cake, although I guess it’s better to stomp those sugary anti-lava platforms than to ingest their frivolous, delicious calories. Mmm… cake. 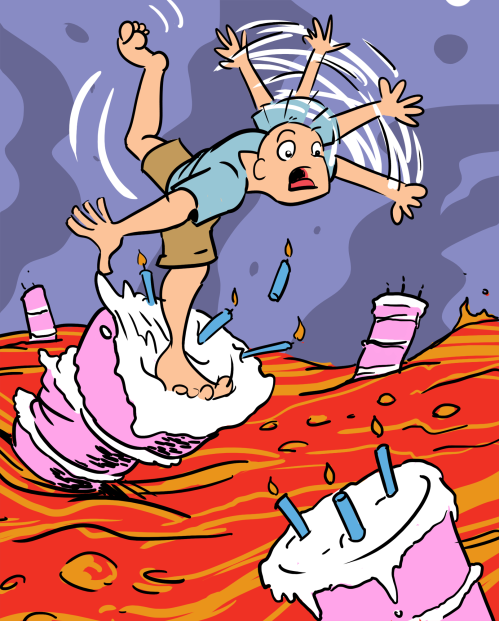 So there I was, completely done with my schooling. I’d just returned from producing a feature film I co-wrote, and everything I owned was safely resting in the hands of a highly reputable portable storage company, whose representative had assured us that he had most definitely left the murderous gang life behind. (But that he couldn’t quite afford tattoo removal). And that’s when I, my roommate, and my one, precious suitcase which had kept me afloat for the last month checked into an Airbnb.

Get ready for it.

This particular studio apartment claimed to be in Koreatown, but was in fact in Little Salvador, I think. Salvadoria, they call it. And what a lovely town it was. Except for the fact that every night, there were prostitutes ten feet from our front door. And these were not just any prostitutes. Nay! These were the scariest, hairiest, bare-(it-all)-iest prostitutes I’d ever seen, and believe me, when I say a prostitute is frightening, you can trust me, because I know pretty much nothing about prostitution.

Now, even though there were a lot of nice ladies with whom you could go for a ride, there wasn’t any place to park your ride. (Best joke ever!) We had to wake up every morning at 7am to move our car to a pay lot before the meter kicked in, and every night we had to move the car back to the street. And this was not just any pay lot. Nay! It was the jankiest, skankiest, rank-(it-low)-iest parking lot I’d ever seen, and it was run by an old black man named Pops. He had one, single tooth, and as far as I could tell, he was homeless (like me!) and spent every hour of his day on a milk crate doing drugs. 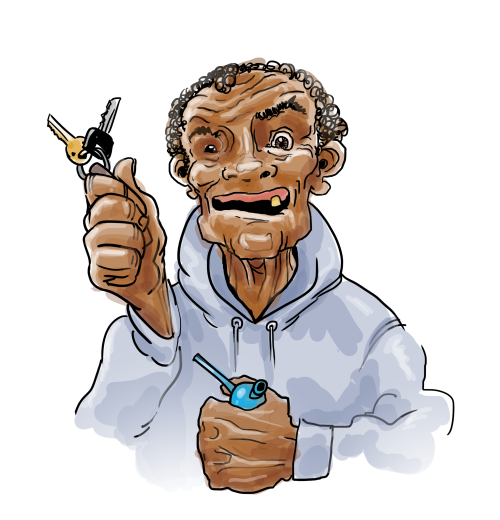 I swear to mighty Zeus, I am not making any of this up.

Pops was quite the character. I felt all kinds of confidence turning my keys over to him, especially when he’d add comments such as “You boys look familiar. Were you in the cell over from me?” Or “Thanks for bringin’ my car back. I’m gonna drive it to Beverly Hills and bang dem bitches.” Then he’d laugh his scary, one-toothed laugh, straddling the line between doing some sort of stand-up bit and simply plunging deeper into the abyss of his insanity. Classic Pops.

One day, after making eye contact—a lot of eye contact—with a homeless person whilst he urinated all over a pay phone, my roommate and I were leaving the pay lot to move our car to the street. Pops was sitting on his milk crate, doing some hard drugs with a deranged homeless lady with pigtails, so we rolled down the window and asked, “Hey Pops, do you know what time the lot closes?”

He turned to us, mad look in his eye, and shouted, as if possessed by the milk crate parking demons of old “You gotta go NOW! NOW, I say! Go boys, GO!” He wasn’t joking around, but we hadn’t quite gotten our answer, so we repeated the question. “No no, we’re just wondering when the lot closes.”

“NOW! Quick! You gotta get out while you still can!”

We weren’t making a lot of progress with the whole getting answers thing.

Luckily for us, there was still one key player: deranged homeless lady with the pigtails. She turns to Pops. “I think they just want to know what time the lot closes.”

For a brief moment, we wondered what had overtaken our dear friend Pops. Drugs? The aforementioned demons? And then we glanced at our clock. It was 7:58. He knew! He was trying to save us.

And that’s why, to this day, Pops is my very best friend.

We found the place! Sure, it’s a little expensive, but it’s walking distance from awesome, there’s plenty of room, and the toilets work. Definitely the place. Only there’s one caveat: the owner wants to meet us.

When you dive deep into the mires of craigslist, you’re bound to run into some unsavory characters… If they’re unsavory, does that mean they’re sweet? The palate of personalities is a confusing place. Our particular dish was an Asian guy named Alex, young dude, slick suit, slick hair, no grasp of the English language. As the guy who listed the house, he joined us on our meet-the-owner adventure.

And meet her we did! This little old lady is like a Chihuahua in human form, what with the constant shaking, the fear of anything and everything, the fraying coat. You know how people start to resemble their pets? Me neither, but in this case, the made-up concept clearly applies, for the most frightening part of the extensive interview process was this lady’s derpy dog. It’s 17 years old, blind, deaf, and barely has any hair left. Basically, it’s this wrinkly, furless skin scrap that has no means of sensing the outside world, so it periodically makes these strange sounds that remind me of a dying bird trapped inside a whirling vacuum cleaner.

I imagine the sounds translated roughly to “Someone, please kill me.” But maybe the other dogs couldn’t quite understand it because its teeth had rotted away, so its tongue was always lolling out of its mouth, and the tongue was bent so it was lolling at a 90 degree angle, which looked about as comfortable as being in a conversation with a scared old lady who thinks you’re some kind of serial killer.

So this lady interviews us,to the background tune of scary dog sounds… For. An. Hour. More than an hour! And the whole thing is some gargantuan sob story/guilt trip. 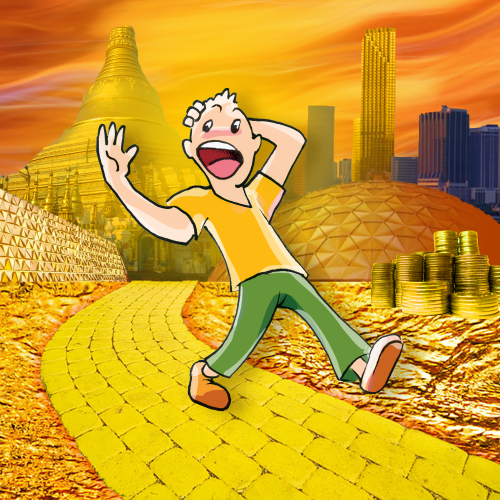 She says she lives in an apartment with no furniture and no TV, so she needs the money incredibly badly. We won’t screw her over, will we? We’ll make all our payments? And we’ll make them on time? In fact, her payments are due on the first of the month, so ours will have to come before then. In fact, who knows if checks might get lost in the mail, so we can’t mail our checks to her. We have to go to her bank each week and deposit money directly. We’ll do that, won’t we? And her daughter has made horrible life choices, so she needs money for her daughter, so we won’t screw her over, right? Please god, promise we won’t screw her over. And this house is all she has left, so we’ll take the best care of it ever, right? We won’t ever wear our shoes inside the house? Even though we’re leasing it, we’ll follow all these specific rules for its upkeep? And since she’s so worried, we’ll pay a seven thousand dollar deposit? She’s taking such a huge risk renting to us, she’s just not sure if it’s worth it. 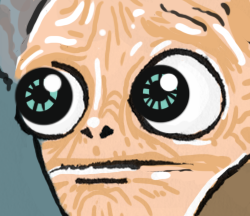 And throughout this speech, she’ll keep wandering into random rooms for who knows what reason, and Alex will turn to us and say “You sign lease, you party! No follow rules, eh? Wear shoes, fuck bitches. You like fuck bitches? I know some bitches, you want fuck them?” And we’re like, “Yeah, sure, Alex. Whatever!” Doing our best to appease the strange personalities around us. Though there was no pleasing that dog.

Then the woman’s leasing agent arrives. Apparently she’d been trying to sell the house and had never rented anything to anyone (obviously), but the market was bad, so she was forced to consider drastic options, like trusting me, the worst person in the world.

Her agent steps in and does the worst job of being reassuring I’ve encountered since my Uncle told me that it’d be fine; everyone accidentally kills a hooker sometime. Just kidding. I don’t know anything about prostitution, remember?

So this agent comes in and explains that our credit is fine, but there’s not much of it because we’re young, but he says we seem incredibly trustworthy so she should definitely lease the apartment to us. Then again, she’s taking a HUGE RISK, but who cares about that? Just go for it. Then again, there’s NO GUARANTEE. But who needs guarantees? We seem nice. Then again, it would be an INCREDIBLE LEAP OF FAITH. He goes on like this, telling her she should do it, then undercutting his own point with this slowly-delivered, over-the-top sense of worry.

The two of them go off to confer, and Alex turns to us again. “You guys do molly? You such cool guys. We go to Vegas, yeah? We party. I have room. We drop molly together. I bring beautiful bitches. They down to fuck. Fuck anybody. When they rolling they just want the sex. They totally fuck you. Gotta wear a condom though. Definitely condom. You down?”

“Yeah, sure, whatever!” we say, wondering how all this madness will play out.

We didn’t get the apartment.