Remember all those computer science friends I jealously mentioned back in the first post? Well now they’re working at startup companies with so much promise that venture capitalists are racing their yachts at ludicrous speed to arrive in time to be the first to invest. In fact, Brian (the roommate) was so tempted by the allure of nautical-themed, computer-science glory, that he hopped into his silicon-covered wagon and trekked to California’s gold rush 2.0, leaving me to my own devices in our apartment.

Not long ago, I used to work amongst those people, but when the company realized how unimportant writing is to the success of a video game, there was a bit of downsizing. They attempted to make it up to me, however, by granting me a one-weekend stay in their six-bedroom, three-yard, one-pool mansion.

Within minutes of my arrival, their productivity was reduced to a full-scale, mouse-pad-Frisbee war that soon devolved into a highly alcoholic game of Settlers of Catan. Sometimes I have the distinct feeling that nerds don’t know what to do with huge quantities of money. 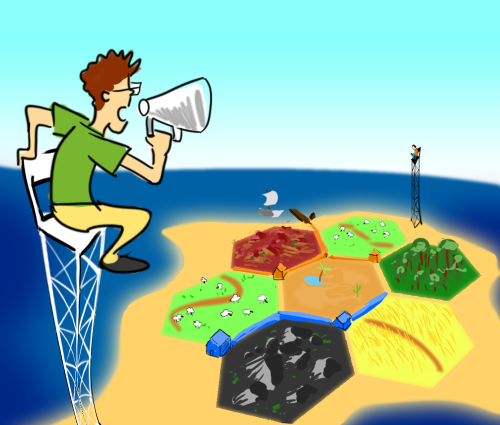 We pulled ourselves together the next morning because the founders had an important social function on a yacht filled with potential investors and their absurdly hot girlfriends, who I found out later were united by a common affinity for wealth. Now, I was the black sheep of the company, but there was an extra spot in the car, so after a brief automotive nap, I found myself stepping onto a massive, fancy boat, attempting with all my strength to fight my hangover and make a good impression on the surrounding millionaires.

Initially, I tried my hand at small talk, only to receive looks of complete and utter disdain from  numerous beautiful women, a not entirely new experience. One deigned to talk to me long enough to regale me with the tale of her company’s camping trip, during which her coworker had slept without a tent and woken up all wet.

“She certainly didn’t know what she was dewing,” I said, and the girl literally moved one chair over just so she wouldn’t have to be next to me.

I wanted to save face but couldn’t think of anything that would help me recover from that abysmal foray into the world of conversation, so I just sat there, staring into the comforting endlessness of the ocean, trying my best not to be noticed. Luckily, I was soon summoned to meet the owner near the prow of the ship. I’d never met wealth-based pseudo-royalty before (though Christian Slater once told me he liked my shirt), and as I headed toward the bridge, my stomach fluttered with excitement.

The moment I laid eyes on him, however, I burst into hysterics, which is a suboptimal way to make a first impression. He was at least 50, the quintessential cliché of pompous opulence: reclined on a large, luxurious cushion of presumably exotic origin, a glass of fine wine in one hand and a small, fluffy dog yapping with ceaseless delight in the other.

As his 20-something girlfriend, also of exotic origin, sidles up a little closer to him, our group sits down on some tacky Astroturf amidst a circle of lowly peasants bequeathing gifts upon him in an attempt to curry favor. The moment he opens his mouth and greets us with his thick, Eastern-European accent, all I can think of are the countless Eurotrash villains Bruce Willis has dispensed with a vengeance. 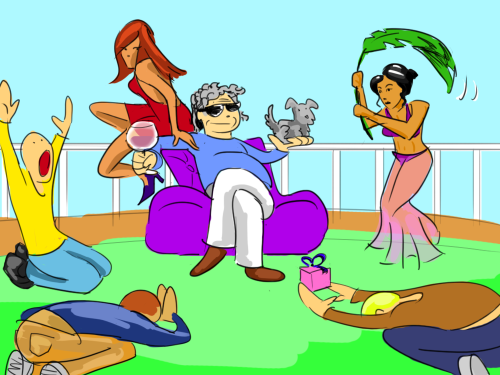 I introduce myself, but it’s one of those moments when you can tell the person considers you to be as inconsequential as a speck of dust, which, I suspect, is the fate of most specks of dust. After responding with the minimum required number of hmms and hrms and not making the slightest attempt to mask his disinterest, Richy McWealtherson resumes his conversation with an attractive young woman and they start joking about Tetris, of all things. Apparently they’d watched a competitive Tetris tournament, and this experience had led the boat king to an epiphany: finally, the baron of all technology could understand how the masses might enjoy something as pedestrian and lowbrow as football. I chime in with “Yeah, Tetris is a lot easier to get into. You’ve only got like a half-dozen players to follow.” They both just stare at me. “You know,” I continue, trying my best to salvage the situation, “like L-block, the square one…”

“There were far more than six people competing in the tournament we observed,” Richy replies, peeved by my disgraceful ignorance. My friends are horrified that I’ve offended their potentially life-changing contact, but before things can get any worse, another worshipper arrives with a bottle of wine. The king points to Juan, one of my friends, and says “go open this,” fully expecting his command to be obeyed with haste and groveling, which it is.

I then have to hold my tongue while the pharaoh and the wine-giver transition to discussing the zombie apocalypse. Somehow, he manages to ruin even this topic, sucking all the joy out of it like a zombie-eating vampire. It’s as if he knows the conversation is widely considered to be pleasurable, but he has no conception of why. Like an alien in human skin, he imitates our species’ smiles and mannerisms to determine how best to conquer us, yet cannot grasp why we might engage in such frivolous endeavors as love, laughter, and debating hypothetical, world-ending scenarios. 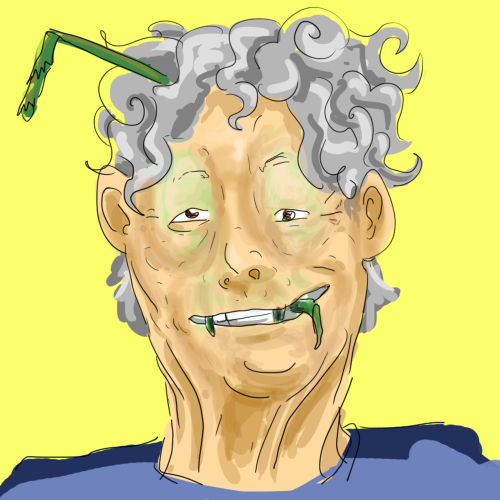 Moments later, Juan scurries back and hands me the bottle—cork 80% of the way out—and some glasses, and tells me to start pouring while he gets more cups. I give the stopper a swift yank, only to have it completely disintegrate in my hands. All these tiny bits of cork are flooding into the bottle of wine, and I glance up, horrified that I’ve been exposed as a despicable, wine-ruining plebian. As luck would have it, the wine-giver still has the king’s attention, though the rest of the retinue is staring at me like I’d just murdered their first-born child. 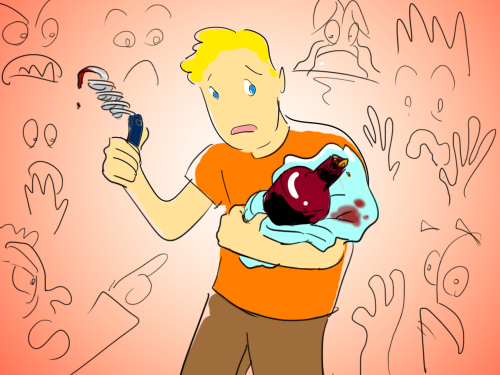 I leap up and sprint into the heart of the boat, frantically searching for some tool that can help me remove the rest of the cork. I weave in and out of computer scientists and beautiful women until I reach the kitchen, but the only things on the table are some plastic cups, a carrot cake, and chopsticks. After briefly employing my lateral-thinking skills in an attempt to deduce the connection between the three, I simply grab a chopstick and start stabbing the cork until whatever parts still had a little bit of structural integrity give in to my brutality and fall into the wine, which is about ten percent cork at this point. I haphazardly siphon it into cups (thus utilizing 2 of the 3 tools available to me), fish out the cork with my fingers, and then pour it back into the bottle, doing my best not to spill it everywhere.

It’s actually sort of working; the only problem is it appears that some hideous, and likely poisonous, fungus has been growing inside the bottle ALL ALONG! I’m suddenly very worried that someone is attempting to bump off the non-terrestrial, millionaire vessel owner (probably to gain an inheritance/become the new overlord of his species) and place the blame on me, the unsuspecting and incompetent cork puller. 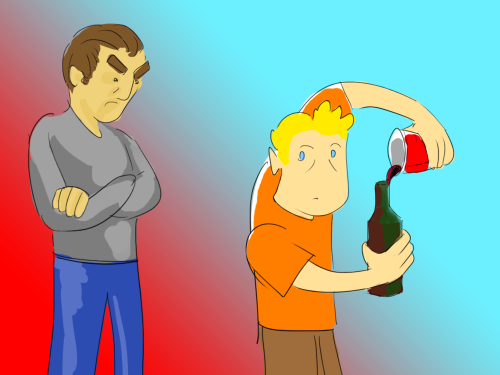 After all, why did I feel the need to sneak off with the bottle of wine? Why did I head down to the kitchen where I could tamper with it alone, unobserved? I’m about to hurl the bottle overboard in a frantic attempt to save myself, when in walks the king’s girlfriend. “Ah, there you are,” she says, and ominously explains that everyone’s been waiting for me. Too afraid to voice my concerns, I hand her the wine and follow her back to the prow. I cringe as she pours out a full dose of poison for all the guests, but before my friends can drink it, I surreptitiously point out the fungus, and we all watch in dismay as king and girlfriend quaff it with hearty abandon.

Luckily, nobody died, so maybe that guy’s immune to poison by now. Or maybe it was some kind of “cultured” wine, like the cheeses that are supposed to be old and disgusting.

After making a whole swath of faux pas and bad impressions, I escaped the royal party and ended up talking to one of the hot girlfriends who happened to be an English major turned author. It seemed that she had avoided the post-graduation English-major blues by being stunningly attractive and not entirely socially incompetent. I stuck with her the rest of the time.

When we got back to the mansion, I drank away the memories, and, in a moment of metaphor, climbed onto the roof and shed all the physical possessions that were weighing me down. I mean, what good is a boat if you never even leave the dock because there’s a chance it might get scuffed? I wanted to live in the moment, to be the kind of person who judges people not because of their status, but because judging them makes for good comedy. But mostly, I just wanted to jump off the roof of the mansion into the pool naked, because nobody’d done it before and there’d be the added benefit of burning a scarring mental image into everyone’s brain. Oddly, I haven’t been invited back since. 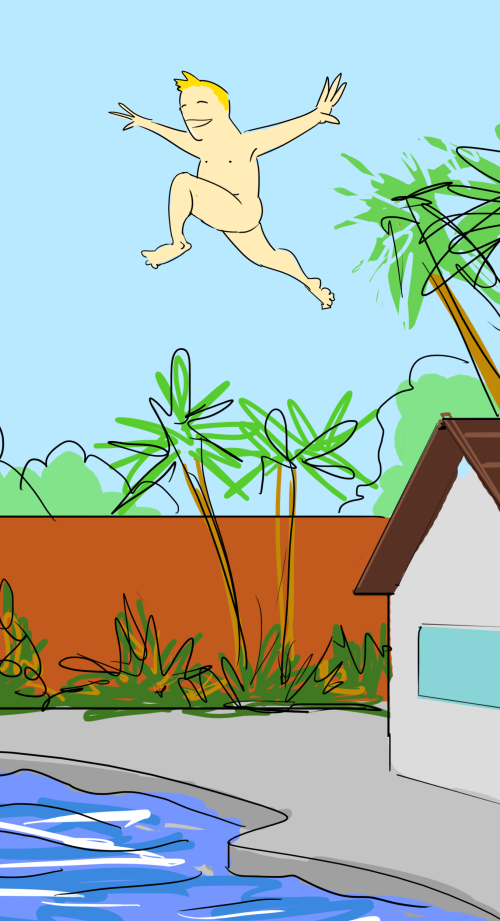