10 Reasons Going to the Gym is the Worst

If you’re anything like me, you spend most of your time in the ten-foot cube that contains your computer. You understand that fresh air and sunlight are good for you, but before you can justify going outside, it’s important that you learn literally everything on the internet. This goal seems always just out of reach, and as time goes by and food and energy drink–intake continues, you find that your body weighs more than it did the day before. As you get ready to travel to the bed part of your cube, you shut down your computer and see your reflection in the blackness of the monitor. Suddenly you are struck with an overwhelming sense of self-loathing. How could I have gotten my priorities so wrong? How can I spend day after day just sitting here, as if—ooh! Half a Snickers bar!

This continues evening after evening until eventually, you find yourself at The Gym.

The Gym is a terrible place, based solely around your most hated activity: exercise. Usually you end up here thanks to the prodding of some well-meaning friend. 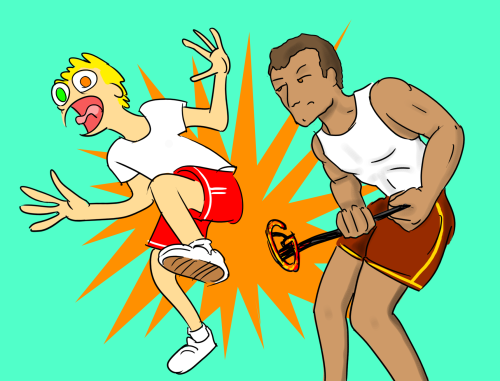 The problem with this is that said friend is going to be somewhat experienced at The Gym and will try to force you beyond your limits, saying things like “one more rep” when you haven’t even managed to do a single rep yet. The friend won’t understand when you feel a weird twinge in your “body area” that is probably your spleen cramping up. And when you refuse to do certain exercises because “the bar is too spiky,” you’ll only invite a second round of prodding.

Which brings me to…

The 10 Reasons Going to the Gym is the Worst

“Bitching Out” is Not Permitted

People at the gym tend to be really into bulking up and being tough. They’re not like you or me, daintily prancing through life, turning our noses at the slightest whiff of physical labor or exertion.  We’ve turned “bitching out” into an art form, but nowhere are our portraits of frailty less appreciated than in a place where the only paint is blood and it’s smeared haphazardly on a canvas of PAIN.

Well aware of this, you have to do your best to conceal your weaknesses. When you pick up those five-pound dumbbells for inclined press and someone scoffs, you tell them they’re to help you rehabilitate your injured rotator cuff, which you presumably injured by having too much sex. That will make them feel abashed, and maybe they’ll even move somewhere where they won’t look at you.

Additionally, when your arms are shaking after two reps, and you know three will be your absolute limit, shout out “Ten!” in the gruntiest voice you can muster. You want it just loud enough to be overheard, but not so loud that it’s obvious you’re lying. If anyone knew how little weight you were actually lifting, you’d certainly lose your man card.

And most important of all, you must wear dark sunglasses. To hide the tears.

Gyms are always playing music to help those ripped guys get pumped up, but screaming and heavy metal aren’t your idea of a good time. So you load up your iPod with all your favorite hits and head to the bench press. You’re actually doing pretty well; this Disney is getting you in the zone. 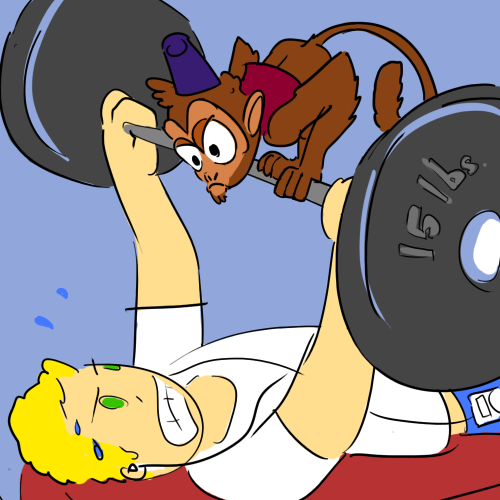 But then someone asks you a question and you have to pull out the earbud to answer. You realize it’s blaring “A Whole New World” loud enough for the whole gym to hear. Why did you turn up the volume so high?

Not to mention that whenever a really good jam comes on you can’t help but dance to it. Your head bobs to “What is Love?;” your feet shuffle to “Party Rock Anthem;” and you superman ho’s to “Crank That.” How do other people not do this?!

Mother of god! It’s like she’s not wearing anything at all! And every single girl is dressed the same. You try to lift weights, but you find yourself imagining each girl naked. You’d think this would be a good thing about going to the gym, and it is…until you’re  yanked from your wonderful stupor by the realization that you’ve been caught. 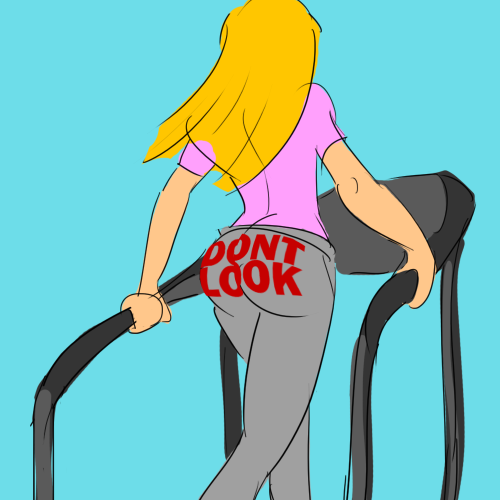 That blonde is totally glowering at you. It hardly seems fair; she’s obviously just there to check out the yoked guys in tight tees, which are the male equivalent of yoga pants.

I don’t see why we have to dance around the fact that we’re clearly all working out to try to get laid, and that guys and girls are both wearing outfits in an effort to attract the opposite sex.

Maybe the reason I always get glares is because I’m working out not to get laid, but because of a doctor’s recommendation. Or maybe it’s my excessive ogle-induced drooling, or ’cause girls don’t want some guy who’s not in great shape slavering over them. Maybe I need to start wearing tighter shirts, and potentially they ought to not have puns on them.

Bros eschew yoga pants in trade for tight t-shirts to show off their “guns,” and their primary exercise is attempting to impress the female denizens. Sometimes they’ll ask you for a “spot.” You might not know what that is, and even if you do, you’re pretty sure you’re incapable of doing it. Or maybe you and a bro will both arrive at a machine simultaneously, and trying to figure out who gets to use it will be incredibly awkward, especially since you both have headphones in and communicating is reduced to a series of non-standard hand signals. 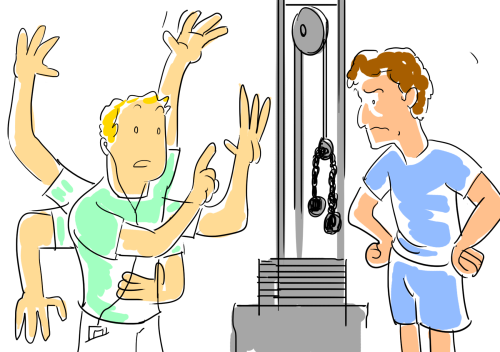 You’ll do your best to convey that you only have one set left, and then the other guy will hand you a stick of gum.

I have a theory that everyone will always be better than you at everything. Like if you go to play tennis, odds are that everyone there is fantastic, because, after all, they’re at the tennis courts. You’re much more likely to overlap with the people who play all time than with people like you, who only leave the house when you’re out of beer or ramen.

This applies to everything, really. If you sleep with someone, it’s likely they’ll be better in bed, because it’s easier to pull a girl who tends to be looking for some action, and if she wants to hook up with you, well, it’s probably less because of your gym-toned body and more because of her alcohol-induced desires.

So according to this theory, of all the people at the gym, you will be in the worst shape. Now that I think about it, this isn’t really comedy—just sad, sad math.

Sometimes things look like they’re going to work out. Sometimes you manage to flirt with the receptionist on the way in, and she doesn’t even ask for your name because she remembers. You’ve made an impression! You note that she too is wearing yoga pants, and, inspired by her callipygian figure, you spout a few choice lines at this girl who’s obviously been hired because of her natural endowment. She laughs pleasantly. Victory!

But then you have to pass her on the way out, covered in sweat and hobbling because your legs feel like the jellied embodiment of overexertion. Why did you think you could squat 200 pounds? She says bye to you all cute-like, and you attempt to wheeze out something clever, but your asthma gets the better of you and you simply cough in her general direction, spittle crashing down to the floor alongside your hopes.

The Whole Experience is Gross

Sweat everywhere! Pouring off the fat people, dripping onto the floor, coating the backs of the benches. You’ll be unable to avoid having your skin gain a coating of the sweat of thousands. And once you’re done with the ordeal, your friends will make you drink horrible protein shakes. And you have to ingest all these weird supplements all the time that are only legal in Asia because they’re liable to make your heart explode with pure INTENSITY.

Soreness? What is this new sensation? Tell it I hate it.

To Look Good, You Must First Look Bad, Young Padawan

So you’ve failed with strangers and the receptionist, but there’s still one category left: people you already know. They’ve gotten a taste of your delightful personality, so you have a little more leeway with them. One shows up to the gym while you’re lifting something alluringly heavy, and she sees your muscles bulging. It’s on. Plus, she’s wearing those skin-tight yoga pants you like so much. She must have put them on just for you. She walks over, smiles, and gives you a hug. Oh god! Not the hug! She didn’t realize how horrifically sweaty you were, and your deodorant seems like it must have worn off a decade ago. 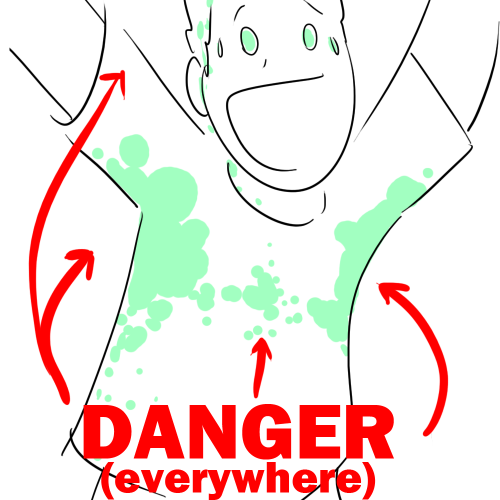 You’re sure that twitch was her smile faltering, and she makes a quick escape. Next time you see her, you try to avoid eye contact.

Why do you always have to run into everyone you know when you look your absolute worst? And how do they manage to sweat the exact right amount to give them a healthy sheen instead of a repulsive coating?

Even though you know going to the gym will mean you make a bad impression on somebody, you still feel compelled. You already paid the damn membership! You better make the most of it. Even if you do feel tired today, and even if you did eat a salad this week. If you don’t go, that money is wasted!

Then again, you already paid. What does it matter now? It’s a sunk cost; going costs the same amount as not going, and there’s a Twilight Zone marathon on TV, and your couch is looking extra comfortable, and you’ve really been wanting to try that new brand of microwavable pizza…