I stood by the side of the road, shaking, whimpering, pleading. I wished desperately that things had gone differently, that somewhere along the line a butterfly had flapped those little wings in some other direction, but deep down I knew there was nothing I could’ve done to prepare myself. He was a lawman, my greatest foe, and neither wit nor intellect would be able to help me this time.

But how did it come to this?

The year was still 2010, and I’d ridden into town not a week back. It was one of those days when the dust caught in your teeth and the air crackled with the reverberations of warning. Brian, the roommate, was having coffee withdrawals and needed to go to a snooty coffee shop to re-up on his fair-trade organic beans. To hide his addiction from the rest of the world, he usually brings a friend along to create an illusion of normalcy. That day, it was my turn. A long bike ride and some unsuccessful barista flirting left a bad taste in my mouth. So did the coffee.

When the roommate saw the sky was getting on toward afternoon and he’d be late for class, my so-called “friend” abandoned me and sped off into the distance. I was alone, trapped in the bewildering and hostile streets of what Oprah called the happiest town in America. I set my jaw and rode for home, but something was wrong.

I was biking on the sidewalk! In an effort to be more lawful and avoid further complications with the overzealous wardens of “justice” that patrolled this backwater whistle-stop, I crossed to the right-hand side of the road and continued my frantic pedaling, but something was still off. Before I could sniff it out, Motorcycle & Mustache pulled up alongside me and started yelling to get to the corner and dismount.

Apparently, I’d unknowingly committed one of the most appalling atrocities that man is capable of: biking against one-way traffic for about 15 feet. Mustache sauntered over to me, aviators lending a daunting aura to his hillbilly strength.

Cop: “ARE YOU TRYING TO COMMIT SUICIDE?!” He seemed not to have basic control over the volume of his voice, but I didn’t mention it for fear he had some sort of disorder. “Cause this is a DAMN good way to do it!!!”

I could kill myself a dozen better ways without breaking a sweat, I thought, ready to rise to the challenge. 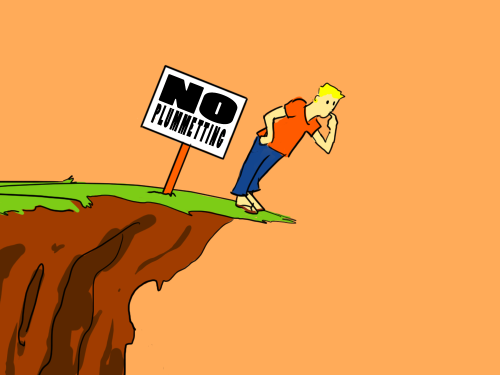 But I let it lie, deciding that correcting him probably wasn’t the best idea.

Cop: “You a Cal Poly student?” His question dripped venom. I got the impression that his wife had been done in by a Poly student.

Just then, I knew I was safe. You see, I hadn’t gone to Cal Poly. As soon as I played the Stanford card, I’d be off the hook and back to swimmin’ upstream, err, up-traffic. So I played it.

Cop: “NOT VERY SMART FOR A STANFORD STUDENT ARE YOU?! DID YOU EVEN SEE THE ONCOMING TRAFFIC?! THREE LANES OF CARS! THREE! A STANFORD student can’t see that? DO YOU HAVE A FUCKING DEATH WISH?!?!”

Russ: “Uhhh…no, sir. I do not have a death wish,” I said meekly. “Honestly, it’s my first week in town and I didn’t know about the one-way streets.”

Cop: “HOW COULD YOU NOT KNOW?! THE CARS WERE COMING RIGHT AT YOU!”

It went on like this for some time, him insulting my skills of observation, me swearing on my grave that I didn’t want to die. Finally he handed me my ticket and left. My first and only real ticket.

Check back tomorrow for Part 4: The Exciting Post before the Penultimate Post, in which Russ uses a test dummy to trick his parents into thinking he has friends.