As you’ll note, especially now that I’m about to point it out, today is a Thursday, which, according to the Mayan calendar, is not a Tuesday. It has been decided that Thursdays shall henceforth be known as the days upon which either, in the rare event that visionary and heartthrob Sam has enough free time, he’ll compose something of great insight and profundity concerning the human condition, or, barring that, I’ll write some sort of gibberish held to a far lower standard than my Tuesday posts. For example, that last sentence was extremely long and unintelligible.

Most likely, we won’t post anything at all. We’re trying to keep you on your toes in an effort to appear unpredictable in that suave, unpredictable-but-I-like-it sort of way.

The reason I’m posting today is because, drum roll, Reasonably Ludicrous got its first ever blog award! For those of you who don’t know, a blog award is like chain mail, only, because everyone in the blogosphere is supportive past the point of sanity, it’s fueled not by fear of being smitten (such a cute past participle) by unseen forces should you fail to perpetuate it, but rather by the common desire to pay it forward, or share the love, as it were.

The self-propagating award we received is known as the 7×7, which is, coincidentally, the hamburger I always order at In-N-Out. The lovely (at least in my dreams), cat-adoring, never-been-kissed, bad-guy-fixated Jess over at Love The Bad Guy has, in her beneficence, presented us this award all the way from down under. If I could tunnel her my gratitude in person, I would, but my arms are a little tired, so I’ll have to settle for simply posting my thanks.

An award! Do you believe it? No matter how intangible, no matter how many strings come attached, I’m ecstatic! Any sort of validation sets my buns ablaze. Thanks, Jess!

Now, as for the award itself, it looks a little something like this: 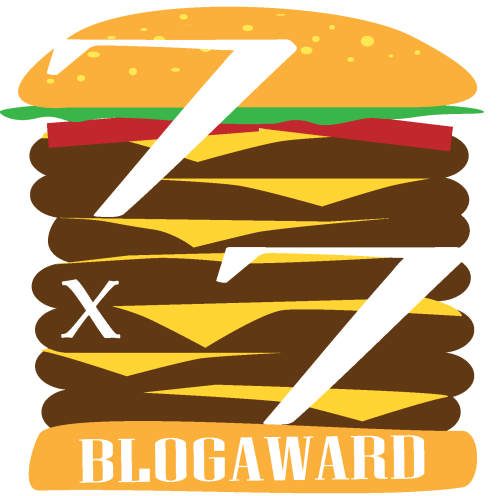 Ah, the delicious patties of praise, lettuce of laudation, tomatoes of tribute, and grease of glory! This particular commendation requires the receiver to answer 7 pre-determined non-questions and then pass the award on to up to 7 other deserving blogs, thus proving that blog awards, like viruses, meet at least 2 of high school biology’s requirements for life. And now, without further gibbering, I present to you the answers to those seemingly unanswerable questions.

So there ya have it. Now it’s my turn, my turn to spread the joy and the burden, the excitement and the obligation. Here’s hoping the blogs I choose plaster that sexy burger on their pages and tell us a little bit about themselves.

Phew. I think that’s about it. This blog award stuff is tough. Did I do ok?

UPDATE: Live. Nerd. Repeat. was Freshly Pressed mere hours after receiving this prestigious award. Coincidence? I think not! Well actually, it’s almost certainly a coincidence, but I can take satisfaction in knowing that WordPress itself agrees with me when I say it’s a fantastic blog.

34 responses to “We’d Like to Have Award with You”