We Can’t Seem To, Uh, Ward Them Off

Like a loyal animal you try to shoo away because you think it’s in their best interest even though you love them, they just keep coming. That is, our second blogaward just padded its way over to us on furry feet. Apparently our enemies’ attempts to encircle us in a blogo-ward have failed, and the “Tell Me About Yourself” commendation was able to break through the barrier and alight on our egos.

Which means that we’re slapping together another slip-shod shoddy slip of a Thursday post to acknowledge the kindness of one of our fellow bloggers. Thanks Book Snobbery! Now, it may technically be Friday, so I’m just going to pretend I’m posting this from Hawaii. Also, it has just been brought to my attention that a second award was able to pierce the force field. What I Meant 2 Say has bestowed a second 7×7 upon us. Huzzah! If we have two 7×7 awards, that’s 49 square units doubled, so 98 square units, which means our new award is 9.89×9.89. With all these awards, it’s starting to get a little crowded in this chainmail. But if we’re going to have any hope of defeating the Orcish brutality of the Uruk Hai of the blogging world who want to horde all the internet readership for themselves, banding together and donning the armor of these self-perpetuating awards is our best bet.

This particular “Tell Me About Yourself” award may not increase our Armor Class much though, for it doesn’t even seem like praise, per se. It’s not a “Best Blog” award, or a “Moderately Entertaining” award, or even a “I Read This and Didn’t Immediately Bleed From the Eyes.” Which is totally one of the craziest defense mechanism ever. Anyway, this award doesn’t seem to have any descriptors or qualifiers of any kind. It’s simply a command that I must follow, and I fully intend to climb down from the Mount Sinai of the blogosphere and obey it. It may be just a drawing on the internet, but ever since that one bush caught fire, I’ve treated every award’s demands as if it were etched on a pair of stone tablets.

So here come 7 things about myself. Hopefully they’re not too revealing.

Once, when I was just a young lad, I found myself in a complicated situation. I wanted to play video games and watch cable television, but my parents thought such activities would rot my brain. I soon realized there was only one thing I could do to achieve my mind-rotting dream. I wrote to Santa Claus, telling him how stingy my parents were. That night, which happened to be the night before Christmas, I heard the pitter patter of reindeer hooves (a very specific and recognizable sound) on the rooftop. I immediately panicked, because I realized Santa did not know my house had no chimney. But I had an iron will and a similarly metallic shovel, and given just a few minutes, I knew I could dig myself a path to Mr. Kringle, and to video game fun. So I got on a stool and began stabbing the roof, with…my…shovel? I’d never expected such success, but the roof collapsed in a perfect rectangular prism, allowing Santa to shimmy down with nary an obstacle. I literally squawked with glee. At first, Santa seemed taken aback, but he must’ve been used to childish bird noises of surprise and delight, so he quickly recovered and handed me the most amazing present of all time. At least, I assumed it was. Santa himself had given it to me! But he made me promise to wait until morning to open it.

The next morning, I opened it.

You can see how that’s the kind of story that informed the rest of my/our life.

Now it’s time to pass this award on to some other unsuspecting blogs. To make it more flattering, I’ve tweaked it slightly. Here are the blogs I think deserve the “You Are Good At Telling Me About Yourself (I Presume, and Hopefully Your Post About This Award Won’t Make a Liar Out of Me)x9.89” Award. It’s up to you guys to tell the world 9.89 things about yourself, then pass it on to up to 9.89 more blogs you deem worthy. 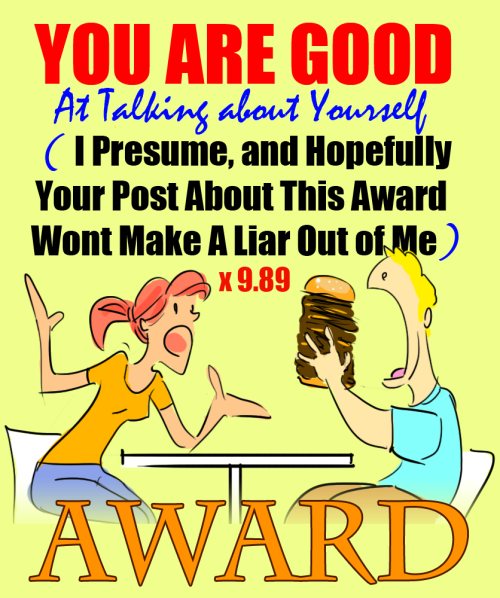 There you have it! And so, like a virus, the award moves on to a new host, and I move on to bed, a place I find myself in all too rarely.